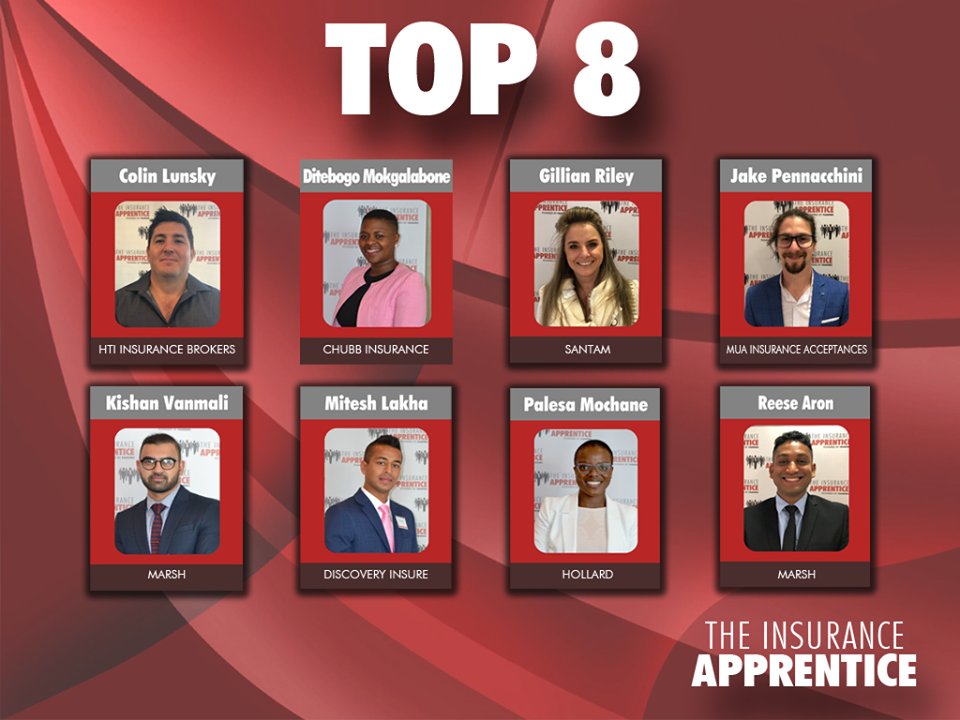 Since making its debut in 2015, The Insurance Apprentice, a series produced by FANews, has gone from strength to strength. The programme, which is flighted on YouTube in weekly instalments, sheds light on the exciting side of the insurance industry – what it has to offer, the benefits as well as opportunities that exist. The show sees potential apprentices getting involved in various insurance-related tasks and facing elimination in each round until only one contestant remains.
Series five of The Insurance Apprentice officially closed with 159 applications received. You voted and we are now down to eight remaining contestants. Congratulations to the final 8 of which five come from FIA partners – CHUBB Insurance, Santam, MUA Acceptances, Hollard and Discovery Insure. We wish you all the best for the final stage of the competition!
Read the press release regarding the announcement of the Final 8 below published by FAnews:

It began with 159 applications, 59 went through to the elimination rounds allowing the panel to identify the top 20 and now, the final eight for The Insurance Apprentice 2019 have been chosen.

Power in numbers
The top 20 candidates uploaded one-minute videos in which they shared their message to the industry and to people outside the industry about why they would be suitable ambassadors for/and within the insurance industry. Voting started, and it was incredible to see how they promoted #TIA2019 on social media… a total of 131 355 votes were received. The votes did not determine who the top eight would be but definitely contributed in making the final decision.

After considering all the elements, the panellists have chosen the final eight applicants who will grace the industry with their presence early next year, on series five of The Insurance Apprentice. They are:

It should be noted that these candidates were highly regarded by the judges during the elimination round and as emphasised previously, the one-minute video exercise served to assist, and not determine, the judge’s final outcome in choosing between those candidates that were neck and neck after the elimination day round.

“Old Mutual Insure will be hosting The Insurance Apprentice so look out for the new look and feel to boardroom sessions, work areas and backgrounds. We will have a #superfan competition in which viewers answer a specific question after each episode. After episode seven all the correct answers will go into a lucky draw and three people will be chosen to attend the announcement of the winner function. On the evening we will have a lucky draw between the three people and one person will win R20 000 cash, sponsored by Constantia Insurance,” continued Whitehead.

“Another exciting development for our viewers is that Continuing Professional Development (CPD) hours will be attached to episodes going forward. Focused on each task at the end of every episode, there will be questions asked with a CPD concept for readers/viewers,” said Whitehead.

Filming will take place from 20 to 25 January 2019. The series will be aired early 2019 via the FAnews and The Insurance Apprentice websites, YouTube and Facebook. In preparation for filming week, the eight apprentices will attend a mentor training day (to help the apprentices assess and use their own dynamics and brand during the competition) and a camera training day (on the rules of tv etiquette, wardrobe and body language).

Winner and runner up prizes
The winner of The Insurance Apprentice wins a trip to Lloyds of London, a R75 000 bursary from Inseta, a cash prize of R20 000 from Masifunde Training Centre, and also R15 000 from Hollard.

Each of the eight apprentices will receive a Samsung tablet with a wireless keyboard (sponsored by Masifunde Training Centre) and a R1 000 Uber voucher (sponsored by Discovery Insure), a book ‘Everything you need to know about non-life insurance in South Africa’, written and sponsored by Gareth Stokes and Liz Still, and a cool gift from King Price.

Proud sponsors of #TIA2019
In showing support here are our #TIA2019 sponsors – thank you for your support and sponsorship:

Previous
Next
PrevPrevious2018 FIA Summit recap: Advice 2020 and beyond
NextPost the 2018 FIA AwardsNext
Previous
Next