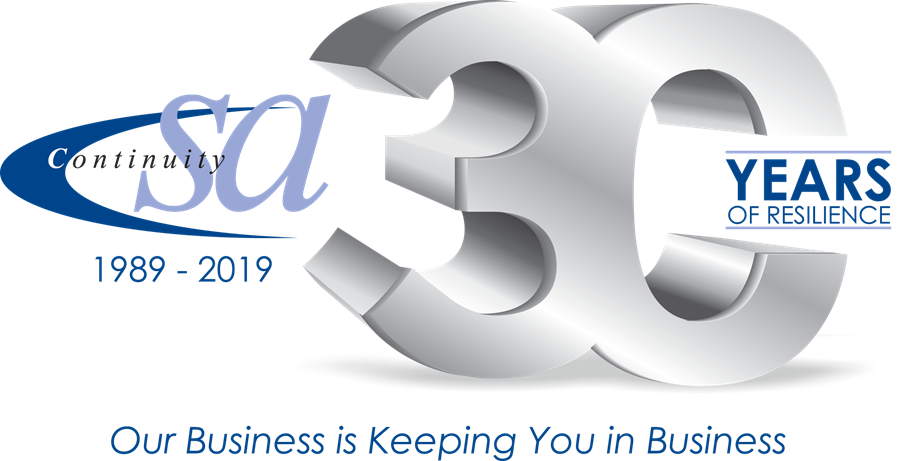 Heightened risk will characterise 2019: business resilience will be key

One of the most important trends to emerge in recent years is that it is increasingly difficult to identify individual risks in isolation, says Michael Davies, CEO, ContinuitySA.

“We live in an increasingly connected world, which means that risk triggers are increasingly interconnected and complex. This also means that when risks materialise, they can play out in unexpected ways,” he says “So while it remains important to undertake a thorough scoping of the risks each organisation faces, it’s even more important to ensure that the organisation is resilient enough to deal with whatever risks do materialise.”

Mr Davies notes that the importance of resilience can be seen in the increasing emphasis that insurers are putting on business continuity as a precondition for insurance.

As it does every year, the ContinuitySA executive team has put together a list of the most pressing risks for South African companies although, as noted, none of them should be considered to be discrete.

Cyber and data risk. In line with King IV, it is probably wise to consider data and technology as two interwoven but separate risk areas. In the technology area, identity theft and ransomware remain key issues but, in ContinuitySA’s estimation, the hacking of mobile devices tends to be overrated as a threat.

Social media has now emerged as a distinct risk. The damage that can be caused to individual or corporate reputations in its hothouse atmosphere is profound.

Data has emerged as one of the key levers of corporate success, and thus a prime target for criminals. Another key area to watch is the cloud, which is playing a bigger and bigger part in corporate IT strategies. The cloud should never be regarded as an adequate backup or disaster recovery facility in itself, as well-publicised outages at leading cloud providers like Amazon Web Services, Microsoft Azure and Google show. “The cloud may be used for backup but then it must be purchased as such, and not assumed to be part of some other cloud service,” Mr Davies warns.

All of these risks are interconnected, and what they have in common is the severe brand and reputational damage that can be caused by any of them.

Health risks. These continue to crop up, and Africa continues to suffer particularly in this area. Recent outbreaks of Ebola in the DRC and cholera in Zimbabwe demonstrate this, but even more worrying is the impact they can have on increasing of intra-continental trade and a more mobile population.

Natural risks. Climate change is frequently seen as a growing risk that will affect Southern Africa particularly acutely. The combination of humanity’s impact on nature and long-term, poorly understood climatic cycles appears to be increasing the likelihood of extreme weather events.

A related challenge is growing world population: by 2050, it is projected that the global population will have grown by 2.2 billion, with more half of that growth occurring in Africa. The resulting pressure on already-scarce resources like water and fuel will increase the impact of extreme weather conditions.

Labour and skills risks. South Africa’s volatile labour relations look set to remain a key risk. A related risk that will tend to worsen employer-employee relations is the growing skills deficit in the country. If labour is unable to compete for the more skilled jobs set to be created in the Fourth Industrial Revolution, and continues to resist the link between reward and performance, jobs will continue to be lost to other countries, and wages will remain low.

Political and socio-economic risks. Regrettably, the growing unreliability of the country’s infrastructure providers such as Eskom and load shedding creates a web of risks that business must prepare for. The impact of a poorly performing educational system have already been described, but the failure or potential failure of many state-owned enterprises is impacting the basic fabric of the economy: energy shortages could again become common, rail and road transport infrastructure is not adequate for demand, water resources are lacking in certain areas and state expenditure remains too high and is frequently misapplied. These are major risks, and their impact is profound and hard to predict. “Facing these challenges successfully will only be possible if you are profoundly resilient,” Mr Davies says. “One could also hope that business engagement with government would result in an attempt to improve the situation—creating policy and regulatory certainty would be a good first step.”

The 2019 elections, for which political parties are already gearing up, is likely to produce adverse conditions for business in the short term even if, in the best case scenario, they ultimately result in a more stable political dispensation.

Geopolitical risks. Most people will immediately identify the American President and his brand of trade diplomacy as the key geopolitical risk at present, but in truth he is simply the exemplar of a global order in the process of massive change. Increasingly mobile global populations are causing huge changes in the world’s most developed economies and amongst other signs, is an indicator to fundamental change and some measure of socio-economic upheaval.

“One cannot really emphasise enough just how the interconnectedness of everything creates and exacerbates risk,” Mr Davies concludes. “Now, more than ever, organisations need to understand what the building blocks of resilience are, and then set about putting them in place.”