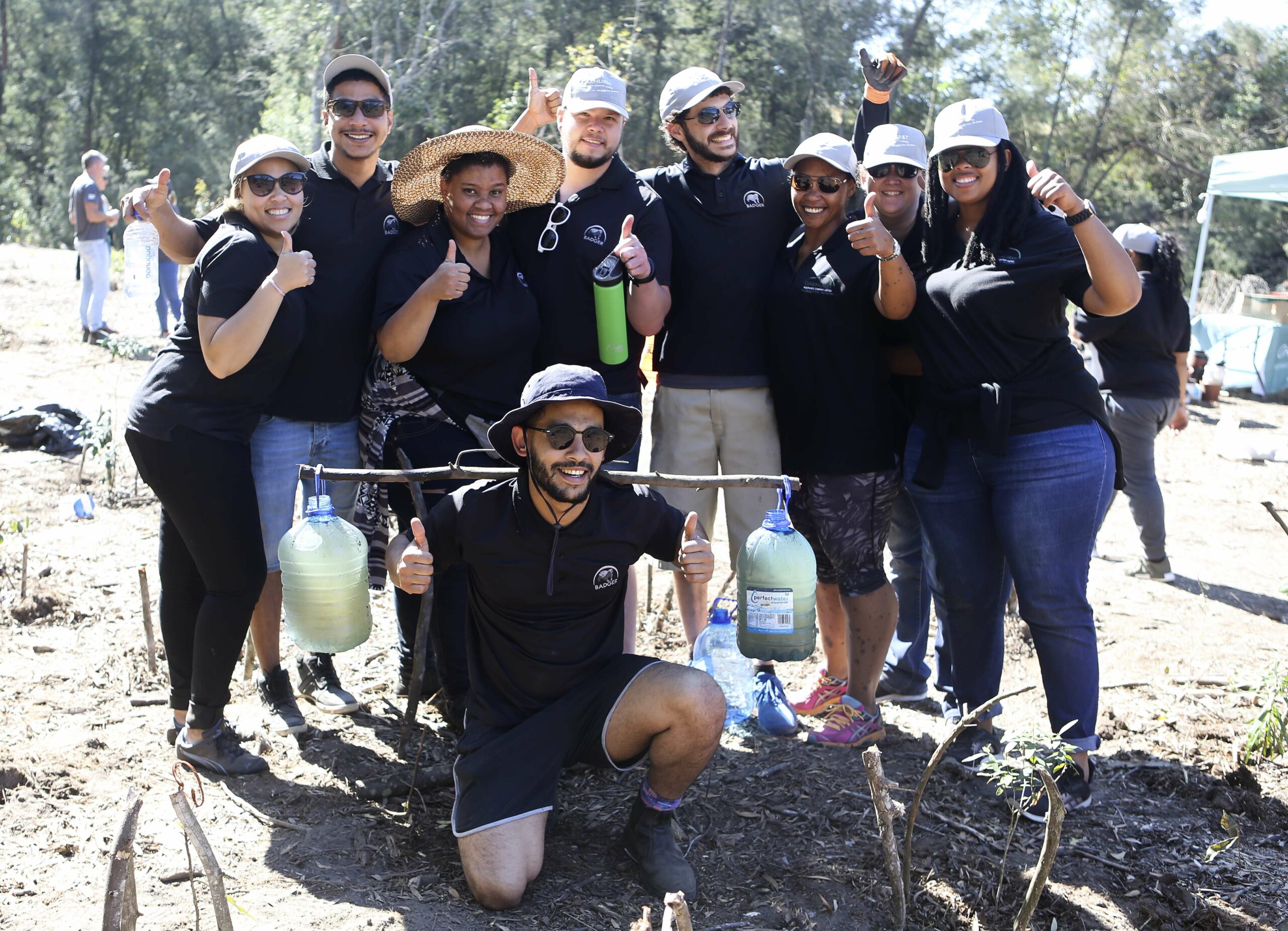 Oakhurst Insurance and friends get planting to save the planet

“The world will not be destroyed by those who do evil, but by those who watch them without doing anything” Albert Einstein

On the 3rd of September 2019, staff from Oakhurst Insurance as well as their business partners and friends from the local community gathered together to plant over 200 indigenous trees, with the aim of growing a brand-new forest.

The global sentiment around Arbour Week carries significant gravitas this year, as experts believe we only have 12 years to save the planet and reverse climate change.

“Mankind is the problem – we’ve messed up the balance. We need to accept how serious this is, take responsibility for what’s happening and unite in rectifying the situation. We can no longer sit back and watch. We are making a start with the Oakhurst Forest – it’s a small start but hopefully it will grow and grow,” said Peter Grindlay – Managing Executive at Oakhurst Insurance.

According to the Swiss Federal Institute for Technology, the cheapest way to reverse climate change is by planting trees, and this has led to the rise of numerous global initiatives. This includes the Trillion Trees project who aim to protect and restore one trillion trees by 2050.

The chosen site for the new Oakhurst Insurance Forest is on privately-owned land in Hoekwil (near Wilderness on the Garden Route), belonging to the Potgieter family. It is located within agricultural lands used mainly for dairy cattle, thus providing a buffer zone against fires. The farm’s position means that it plays a significant role as part of the local Fire Prevention Association. Oakhurst Insurance is also working closely with non-profit organisation, Precious Tree Project, as well as the Potgieters, who are actively involved in the removal of invasive species before the planting of indigenous trees can begin.

“We hope that this forest initiative could become an example to everyone on how collaborations between farmers, business and environmentalists can make a tangible difference in saving the planet. When these various sectors decide to work together, momentum shifts and the tide starts turning,” said Linda Potgieter – Hoekwil landowner.

“It was amazing to see so many people gathering together, taking action to combat climate change and its devastating impact on our planet. Oakhurst Insurance’s commitment is truly inspiring and restores one’s faith in humanity, and that together we can make a difference,” said Melissa Dalton – Precious Tree Project.

The following indigenous trees were planted:

As a special token, nine trees were planted in honour of the nine participating schools from the World of Tomorrow festival held at the Oakhurst Insurance George Arts Theatre a few weeks ago. These schools performed excellent theatrical pieces that raised awareness around global warming and deforestation.

“The tree in our logo shows that a love for nature and really caring for our planet has always been part of our DNA. Planting trees makes a difference and we are honoured to be working with the Potgieters, the Precious Tree Project and other friends of the forest in this inspiring, world-changing endeavour. Planting trees is an investment for the future and is one of the most important steps we can take in contributing toward the health of our planet. Arbour Week has taken on a more urgent intensity this year, and we hope to call on the support of many of our partners to join us in growing this forest. We are committed to continually raising awareness around climate change and its impact and will continue to fight the good fight, one tree at a time,” said Peter Grindlay.

Over the next 40 years, the Oakhurst Insurance Forest is expected to absorb 200 tonnes of carbon dioxide, and that’s from the 200 trees alone which were planted on the 3rd of September, thus contributing to the overall conservation of our planet. It doesn’t stop there, this tree-planting initiative will be an ongoing project with plans to expand the forest along the meandering river where it is situated, creating many opportunities to contribute towards the purchasing and planting of trees. The intention is that many more tree-planting days will be held in the near future. In so doing, people will have the opportunity to support community upliftment, job creation, public education forums and a whole lot more. Oakhurst Insurance hopes that their actions will inspire other organisations to get involved in growing their forest.

“Our game plan here is to grow the forest as our resources permit , and as with all things, having the right partners and relations is critical. The timing for this initiative, given the urgency of the matter is optimal, and this also ties in perfectly with our firefighting initiative”, said Peter.

If you would like join them in planting trees to save the planet (the current cost of a sapling is R200), or for more information on this project, please email trees@oakhurstins.co.za.

The first Arbour Day originated in the US in 1872 and was adopted in South Africa in 1945. It has since been extended to a weeklong awareness drive, from 1-7 September

Previous
Next
PrevPreviousCollaboration breeds success. Book now for the #FIAAdviceSummit
NextTop tips to Spring clean your insuranceNext
Previous
Next