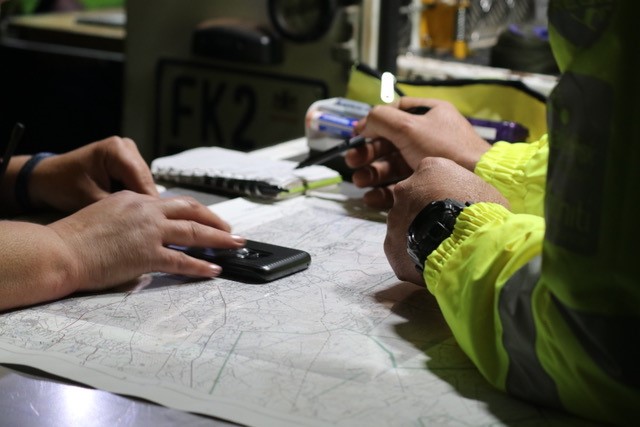 The Off-Road Rescue Unit (ORRU) this week celebrates 30 years of rushing to disaster scenes to save lives.  The volunteers – unsung heroes who shed their everyday work clothes to become first responders in emergencies around the country and beyond the borders – are officially recognised by authorities in the search and rescue field.

Here is their story….

The recent flash floods in across Gauteng and the crisis late last year in the Centurion, Mamelodi areas when dramatic footage of highways underwater and cars lost crossing over low-lying bridges dominated the headlines for days on end saw ORRU among the first responders in their reflective, high-visibility yellow uniform vests seen in action on news footage videos. ORRU members relate their experiences:

“I managed to haul some people to safety says Andrew Hoy modestly, a paramedic who dedicates his ‘free time’ to ORRU. “Five people were also airlifted out of Mamelodi.”

“People were standing on rooftops and clinging to trees,” says Ivor Rimmer – the team refers to him affectionately as “‘the Colonel’ – aka the A Team,” recalls Hoy.

The A Team, it turns out, is not a far-off description. The Off-Road Rescue Unit (ORRU) celebrates 30 years of continuous volunteer work this month of February. It is a government-sanctioned response unit specialising in search and rescue, often in areas few others can get to. The members come from all walks of life including ex-military, ex-nurses, ex-police and firefighters, giving ORRU a wide range of operational skills.

ORRU members are a group of volunteers who provide their own equipment, are highly trained and go out rescuing at a moment’s notice despite having full time jobs.

ORRU has saved many lives in disaster situations locally and abroad, including in Japan, Haiti and Mozambique. The team has worked on aircraft crash sites, the recovery of missing persons and mountain rescues to name but a few.

ORRU also provide critical support at sporting events, all in the interest of safety.

On 24 April this year, the ORRU team will come together from five provinces for the joberg2C cycle race. Infiniti Insurance Limited and Galileo Risk (Pty) Ltd collectively sponsor the ORRU team each year to act as the race’s safety team, working in conjunction with ER24 medics.

“We came to know ORRU through joberg2C, the organisers of which we rate highly and agreed to provide support in the form of some sponsorship,” says Sharon Paterson, Chief Executive Officer of Infiniti Insurance, co-sponsors of the ORRU with Galileo Risk insurance brokers. “We were particularly excited when joBerg2C organisers suggested the ORRU team because their role is fully aligned with risk management – which is the right place for an insurance company to be.” Paterson explains.

“ORRU are at the soul of joberg2C and add character to the event as the ultimate off-road MTB event of South Africa,” says joberg2C director Craig Wapnick. “You only realise their [ORRU] full value in an emergency,” he adds.

The team swaps joberg2c stories in the same way they do about rescue missions in a disaster type situation. Among the anecdotes shared by ORRU members is the story of Douglas, a blind Kenyan man who did the race on a tandem bike and Paulo, who rode despite having stage four cancer. ‘We phoned Paulo’s doctor, who said let him race. Let him enjoy!’ said his doctor.

Planning for the 2020 race is well underway, rescuer Hugo Durant talks about Eric van Galen, a man who was paralysed from the chest down some years back in a car accident. Eric and two other quadriplegics will be doing the joberg2C on e-bikes.  That’s the new challenge for all of us this year,” says Durant.

It is, perhaps, the best way to see the famous race – looking through the eyes of those behind the scenes. The ORRU team undoubtedly experience the essence of the 9-day event. As an ORRU member pointed out ‘This is why ORRU is there – the call to adventure and the indomitable human spirit calls us from behind a desk and into the wild.’

Many of the adventure thirsty cyclists don’t realise ORRU is there to provide them with assistance in an emergency – until they get into trouble, that is.

“I accidentally met the ORRU team last year on day five of the joberg2c at the 73km mark,” laughs Hayden Simpson, director and shareholder at Galileo Risk.  “I cycled into a hole, flew over the handlebars and smashed my shoulder to pieces! So, when Craig Wapnick suggested sponsoring ORRU, I said: ‘We have to get behind these guys, they’re incredible.’ The way one experiences the ORRU support speaks loudly to what we do – ‘insuring peoples’ safety’.”

“These are the volunteers that rush into danger, just like firefighters and police – the difference is it isn’t their job,” Simpson goes on to say: “Here are guys that use their own personal leave time, their own personal expense, while risking life and limb to assist people they don’t know without remuneration – because they are passionate. These are true heroes. After the cyclone, they were among the first guys on the scene in Mozambique, doing the hard work on the ground for no fanfare.  It’s beyond me and we salute them!” concluded Simpson.

*The Off-Road Rescue Unit (ORRU) is a government-sanctioned, highly trained response unit specialising in search and rescue in hard-to-reach locales. The crew of experts operates as a civilian volunteer organisation that works closely with national emergency management services, disaster management, the SAPS and various other rescue units across South Africa and in neighbouring countries whenever and wherever the need for specialist search and rescue arises.