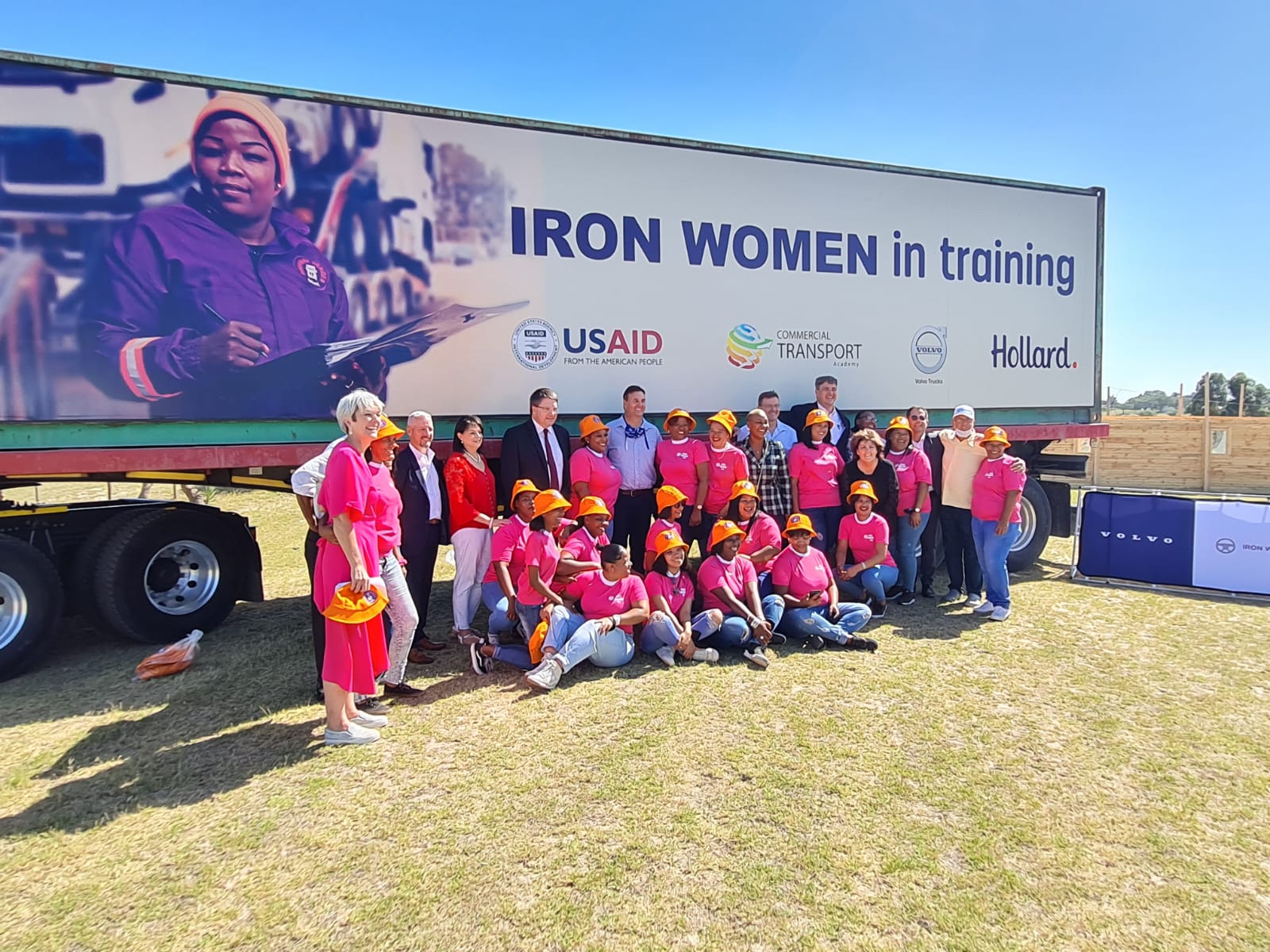 Budding ‘iron women’ have diesel in their veins

They may have been dwarfed by the enormous truck behind them, but the cohort of determined young women in pink T-shirts posing in front of its colossal trailer were anything but overshadowed. They were all on their way towards earning their code 10 or code 14 heavy-vehicle driving licences and taking this beast – or another like it – onto the open road.

The occasion? The recent official launch by the Commercial Transport Academy (CTA) of the pioneering Women Inspiring Women to Lead in Transport (WIWIT) initiative in the Western Cape.

The place? The site in Philippi outside Cape Town where these women are completing a four-month WIWIT Iron Women programme that aims to empower and upskill them to acquire their commercial driving licences, as well as help them gain confidence and, ultimately, secure employment.

Not only are these aspiring truck drivers undergoing advanced driver training, they’re also enrolled in theoretical training and – in preparation for entering a notoriously dangerous sector with a pitifully low female representation of only about 1.1% in South Africa – vital soft-skills programmes on gender-based violence awareness, HIV and Aids, harassment in the workplace, and personal budgeting.

This ambitious and much-needed initiative, which aims to address the glaring gender imbalance in the transport and logistics industry, has already had considerable success in Gauteng, with 83 women truck drivers in the province having completed the training and the vast majority securing jobs.

In November 2021, CTA founder and CEO Nicci Scott kicked off the programme’s operations in the Western Cape, targeting women from the Atlantis, Dunoon and Philadelphia areas outside Cape Town, where unemployment is rife and opportunities are scarce.

The ultimate goal is for more than 900 women nationwide to be empowered through the initiative – not only qualifying as truck drivers, but also working in the transport and logistics sector as entrepreneurs, and in professional roles.

Scott told guests at the launch on 24 February that the aim is to give the trainees exposure to all the different trucks and trailers on South Africa’s roads, making them highly employable. “For them, getting a driver’s licence is life-changing,” she stressed.

“We don’t just need drivers. We need skilled drivers. The heavy commercial truck sector is growing, and e-commerce is growing.”

However, not all trainees will end up as heavy-vehicle drivers – the objective is “to get more women into the transport sector at any level”.

Hollard Trucking is a major sponsor of WIWIT, alongside the United States Agency for International Development (USAID), the Road Freight Association, and brands like Volvo Trucks, telematics company Ctrack, logistics provider Trucklogix, and others.

The insurer’s involvement in the initiative – in Gauteng and now also in the Western Cape – includes sponsoring two branded truck trailers for advanced truck and driver training for the women, as well as computer training centres with 20 laptops, desks, chairs, wallpaper, student bags, and access to the user-friendly Learnovate e-learning portal of soft skills courses.

Speaking at the Western Cape launch, which doubled as a celebration of the success so far of the Iron Women programme, Hollard Head of Trucking Wayne Rautenbach said Hollard is “very privileged and proud” to be involved with the initiative.

Since Hollard Trucking is in the business of insuring trucks – and responsible for payouts when there are accidents on the country’s highways – it wants to ensure that trucks are driven well. It is therefore committed to supporting the programme and really interested in following its progression and seeing the results over the next few years, he said.

Ralph Koehring, USAID’s Southern African deputy mission director, said, “It’s the right thing to bring women into different sectors, but it also makes business sense … The trucks last longer with ladies driving them, and there are fewer accidents on the road.”

He told the trainees, “You are role models for your families … It’s an extraordinary trajectory of growth if women are part of the economy.”

Western Cape Minister of Finance and Economic Opportunities David Maynier, whose department is supporting WIWIT through providing stipends for the learners, said the trainees are “giving hope to young people”, and partnerships are central to converting learning opportunities to full-time jobs.

Quinton Roos of Trucklogix, a division of OneLogix, noted that his organisation has enthusiastically taken up the gender transformation challenge, changing its entire operating structure from being “designed around men only” to one welcoming women into the fold through learnerships, in some cases followed by full-time employment.

“It’s made us better,” he said. “Statistics show that incidents [on the road] involving female drivers are a fraction of those of male drivers. And our fuel use has been better [since women were brought in] – benefits continue to be shown.”

Raymond Schulz, Ctrack chief executive for marketing and sales, urged the trainees to make use of technology, saying tracking systems can improve driving performance. He added, “I can see you’ve got diesel in your veins.”

Thaakirah van Nelson, a Western Cape trainee who has successfully completed the WIWIT Iron Women programme and has already passed her code 14 driving test, summed it all up neatly: she said she is grateful for the opportunity to be part of WIWIT, describing the initiative as something that seemed “too good to be true” when she first heard about it.

The process of learning to drive, gaining practical skills, and studying theory and soft skills, has not only been life-changing (she is currently on a formal work experience programme), but has also allowed her and her fellow trainees to become “sisters”, she said.

Previous
Next
PrevPreviousFive amazing benefits of a connected car
NextBrokers And Technology: Not A Zero-Sum GameNext
Previous
Next