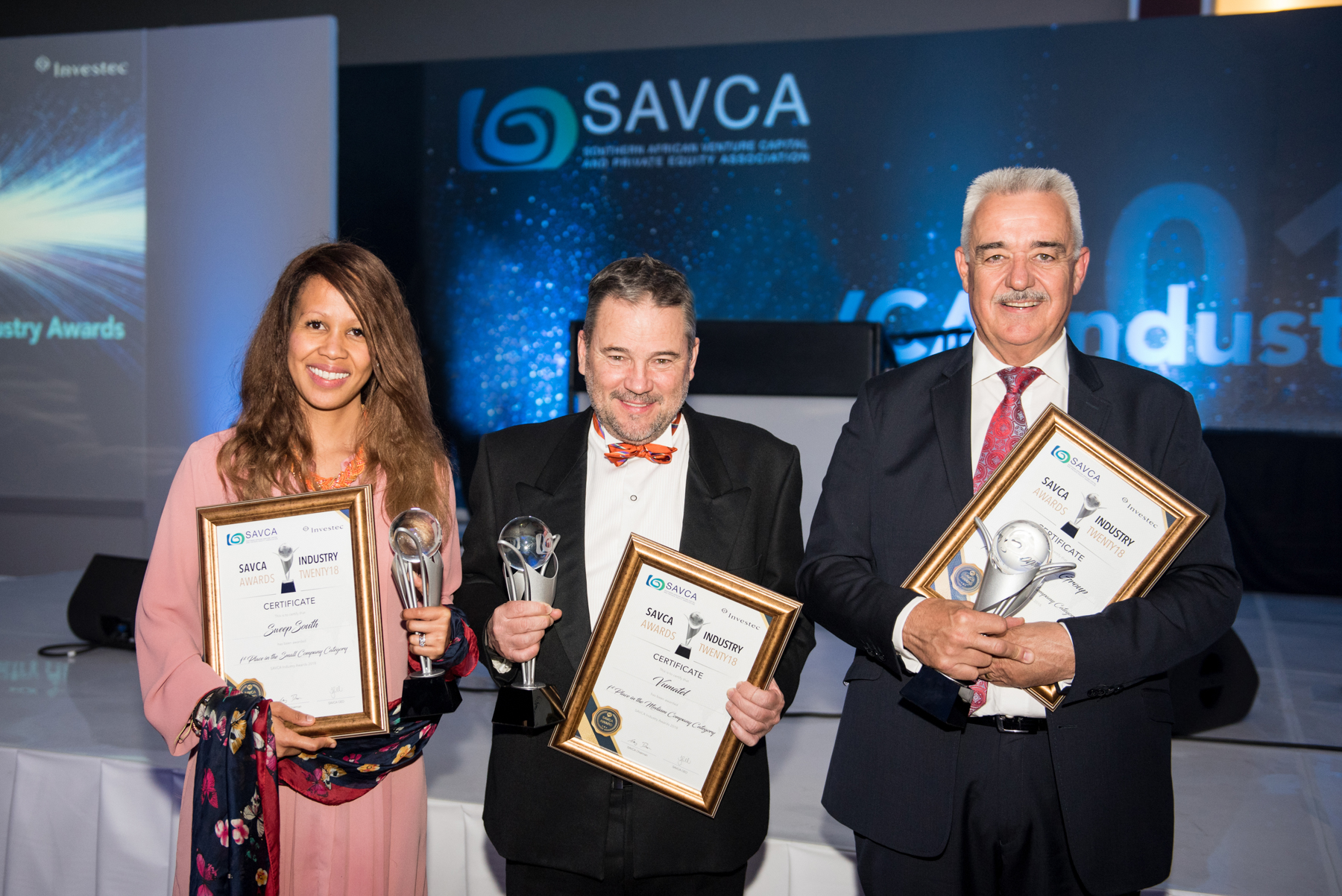 Following a gruelling judging process of the extraordinary companies that were in the running, the Southern African Venture Capital and Private Equity Association (SAVCA) announced the winners of the inaugural SAVCA Industry Awards, held in proud partnership with Investec, at a dazzling gala that took place  in Johannesburg last night.

Speaking at the event, Craig Dreyer, SAVCA Chairman, commended all participating investee companies on having made it through the final stage of the process. “Each of these nine companies stand out amongst their peers for different reasons and are proof of the positive impact private business can have on the South African economy.”

“Congratulations to all of the finalists on building such robust businesses and thank you for embracing the value that private equity and venture capital investment can have on a business.”

Also speaking at the event, Andrew Chananie, Head of Leverage Finance at Investec – the lead sponsor of the event – said that it has been an honour partnering with SAVCA to shine a light on the industry and its impact on the economy. “These awards are a great way to recognise the exceptional performance of portfolio companies in the sector, and raise awareness of their vital contribution to society.”

The three 2018 category winners are:

Currently in South Africa there are about 270,000 unemployed registered domestic workers, SweepSouth – a pioneering on-demand online platform for booking home cleaning services by connecting households with domestic workers – has reduced this number by 3%.

Nominated by the Vumela Fund, managed by Edge Growth, SweepSouth has grown from just three domestic workers and two co-founders when the business started in 2014, to employ 38 people in-house and 8,000 “SweepStars” across South Africa.

Since 2015, when the Vumela Fund came on board, the annual revenue has grown by 1,050% over the term of the capital injection, with gross profit having grown in this time by 100 times since the inception.

A pioneer in growing the fibre-to-home industry in South Africa as a source of fast reliable internet, Vumatel was nominated by Vantage Capital for the role it has played in this emerging industry, the broader socioeconomic impact of providing connectivity, and the many sustainable job opportunities that have been created as a result. Vumatel’s staff compliment has increased to 660 permanent staff and 4000 contractors used.

Since receiving R250m of growth capital to fund its expansion in 2016, Vumatel has grown its subscriber base from less than 3,000 and 30,000 homes to over 63,000 subscribers and 200,000 homes by 2018. This growth has not only increased connectivity across the country, but has also challenged existing monopolies to the benefit of South African consumers. As part of its efforts to bridge the digital divide, Vumatel has installed free fibre in over 150 primary and high schools, positively impacting around 120 000 learners and are also running a project of fibre to the home in Alex Township providing 100mb uncapped for R89p/m.

Nominated by Rockwood, Tsebo Solutions Group is South Africa’s third-largest outsourced services provider in catering and facilities management, operating in 27 countries with five service lines and over 39 000 employees. Managing director Clive Smith maintains that the assets of the company are the employees and customers, and almost half of its revenue is paid to staff monthly in the form of salaries.

Often a first-level employment option for school leavers looking for work in the formal sector, the group trains about 50,000 people on a two-year cycle, at a base level. Further to that there is significant management training, from supervisory and middle management to executive management.

Dreyer concludes that the success of this year’s winners is testament to the ability of private equity and venture capital investment to drive real economic growth and development across the country. “In addition to celebrating excellence in business acumen within the private sector, we hope that these three leading companies will continue to showcase and promote the exceptional effect that this type of investment can have on job creation, inclusivity and growth across the broader South African economy.”