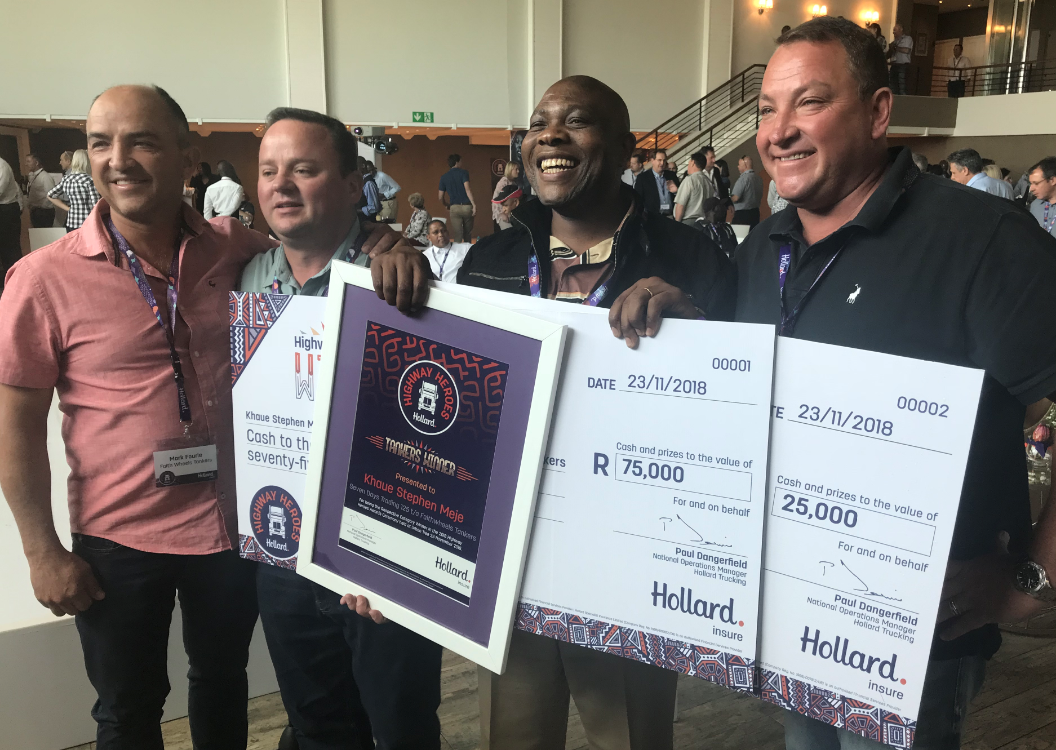 Advice is arguably the most important contribution an insurance broker can make when it comes to making sure that a customer is properly covered.

Of course, that largely entails advising the customer about policy options. But great advice – like great insurance – should take things a little further than that: it should unlock value.

I’d like to use as an example the Hollard Highway Heroes competition, for two reasons. Firstly, it’s timely, given that the 2018 winner was announced on 23 November, and secondly, it’s very close to my heart. (I’ve been involved in running the competition since its inception in 2015.)

A little background: Highway Heroes was launched in 2015 by Regent Commercial Vehicles, which as many of you know has since been incorporated into Hollard Trucking, with Hollard’s acquisition of Regent Insurance in 2017. It had its genesis in a driver training initiative, which – like the subsequent competition – was a way to offer fleet owners value.

Essentially, Highway Heroes encourages truck drivers to be the best they can be, by incentivising them with fantastic prizes; the 2018 winner, Stephen Meje, of Pretoria-based Faith Wheels, has taken home no less than R100 000 in cash. (This year’s competition, for the first time, offered multiple prize opportunities amounting to over R200 000.)

An over-the-moon Meje said after his win that his prize would change the lives of his family, which is wonderful to hear. Just as heartening was Faith Wheels director Mark Fourie saying that Meje’s Highway Heroes participation had inspired the company’s 64 other drivers – and the company itself, which will double its annual driver’s prize to R10 000 and also plans to institute a monthly prize.

Drivers have enthusiastically embraced Highway Heroes, with entries increasing exponentially. There were just over 1 600 entrants this year, more than seven times the 220 in 2015. I fully anticipate that the 2019 competition will see another great leap in the number of participants.

Beyond the obvious value that truck drivers can derive from participating in Highway Heroes, fleet owners – the policyholders – also draw immense benefit. Because their employees drive better (and continue to do so long after the competition is over), they have lower running and maintenance costs; their vehicles are involved in fewer accidents, and they thus submit fewer claims; and they access more affordable insurance as a result.

That’s real, tangible value. And it’s great insurance practice because not only are customers covered for when disaster strikes, they’re actually better off the rest of the time, too – at no additional cost to them.

As an added extra, so are you and I. By getting thousands of truck drivers to consistently be better road users, our country’s highways are safer for everyone else, too. How’s that for fantastic value?

As an insurance intermediary you can make an enormous difference for your customers, one that goes way beyond simply selling a policy, when you look for value as well as proper cover.

You, too, will derive your own value by doing so: your customers will know that you have their interests, their success, at heart – and they will be loyal. They will buy more insurance from you. And they will tell others about you.

That’s the value of industry initiatives such as Hollard Highway Heroes. They offer value, and they create it. And everyone wins: the insurer, the customer – and you.