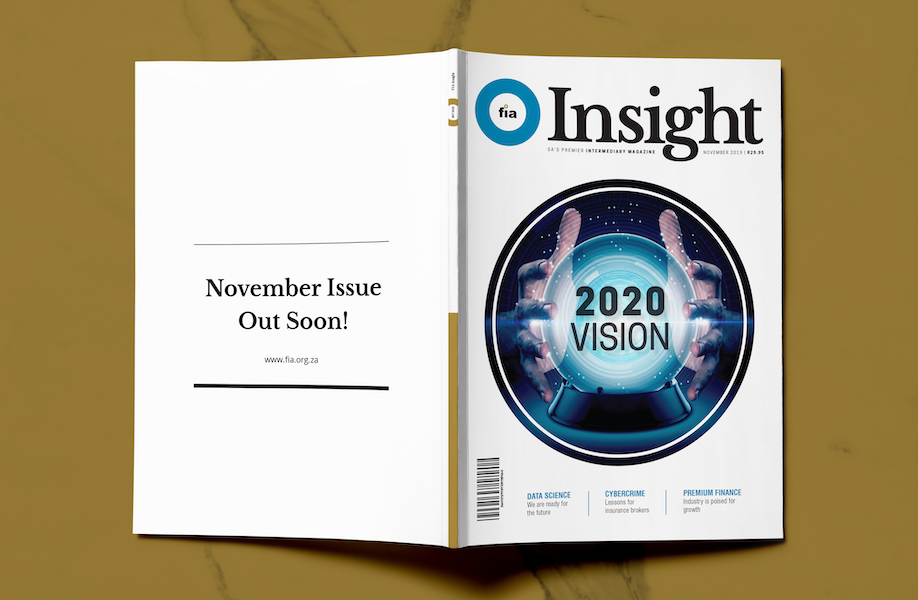 This article appears in the upcoming issue of FIA Insight magazine, which should hit your desk soon! (Not subscribed? Email questions@fia.org.za for details on the benefits of FIA membership.)

In the midst of the ongoing deluge of regulatory changes, another trend is emerging that could signal a total change in mindset in our approach to insurance going forward.

There has been much talk about the advent of big data and the likely impact that it may have on the insurance market. As yet we have not seen huge developments on this front.

One perhaps needs to separate the issue of big data and its use from that of the collection of the data, as these two have very different challenges and implications. We naturally have a problem with businesses looking to use data about us that they have acquired through “third party” sources rather than from us directly — even if in the process it results in a more personalised offering — purely because we somehow feel violated in the process. So one can say that there is clearly a direct conflict between the issue of data confidentiality and the handling of data as envisaged by POPI. The implications of the big data drive going forward are likely to be quite interesting. As data management as a science becomes more prevalent, care is going to have to be exercised as to how it is collected, stored, managed and put to use.

The use of big data to guide insurers in their underwriting decisions is just another step in the move towards individualised treatment, which is in some ways in conflict with the fundamental principle of insurance – be it life or non-life, where the premiums of many are pooled to provide for claims from the few ”unfortunates”. (This is essentially a type of “socialist” concept, which is possibly out of step with current capitalist thinking.)

While a measure of underwriting to ensure that the premiums paid are reasonably in line with the individual risk presented, if taken to an extreme this almost results in the demise of insurance as a principle. (If each risk can be determined with 100% accuracy then an alternative to insurance becomes simply for the individual to look to finance themselves and to rely on a bank “advance” should the timing of the event be earlier than anticipated.) An interim step towards this is the pooling of risks, which allows for proportionate pricing but also requires adequate pools for the poorer risks — something that seems unlikely in South Africa given our relatively small market. Furthermore, the pricing could also result in those who most need insurance cover not being able to afford it.

The use of big data in marketing is probably to be welcomed — provided we can get over our natural opposition to so-called invasion of privacy — as it would lead to a more focused offering. In claims and other service functions the benefit to the consumer is perhaps less obvious, although one would probably argue that it is in the interests of society in general if insurers are able to eliminate claims that shouldn’t justifiably be paid for whatever reason.

Having said that, the use of big data as a tool is inevitable in many businesses going forward, including insurance. On the face of it, one may say that this presents a threat to the broker market in that big data usage may inevitably lead to more of a “robo” approach to marketing, where the role of the broker as an intermediary/negotiator is all but eliminated. The challenge in this is to find a way that intermediaries can make better use of technology to promote their own role – something which is perhaps not evident at this stage.

It should, however, be noted that a likely outcome of the trend is that insurance terms may be offered to consumers on the basis of the insurer’s data, with little or no obligation on the part of the insured to make any declaration around the specifics of the risk. This may be seen as a positive for consumers, who otherwise face possible non-disclosure repudiations purely due to ignorance.

The advent of AARTO in South Africa, which is another example of how we continue to strive to keep up with international developments, could be a further step in the use of big data linked with telematics. Although initially insurers will not adapt their underwriting to take into account progressive AARTO demerits in underwriting by loading motor premiums. Over time this is probably inevitable.

Big data is here and it’s here to stay. The way we manage it is up to us.

Previous
Next
PrevPreviousThe future of car insurance is here. Well, almost.
NextPractice makes perfect: the importance of stress testing in ransomwareNext
Previous
Next