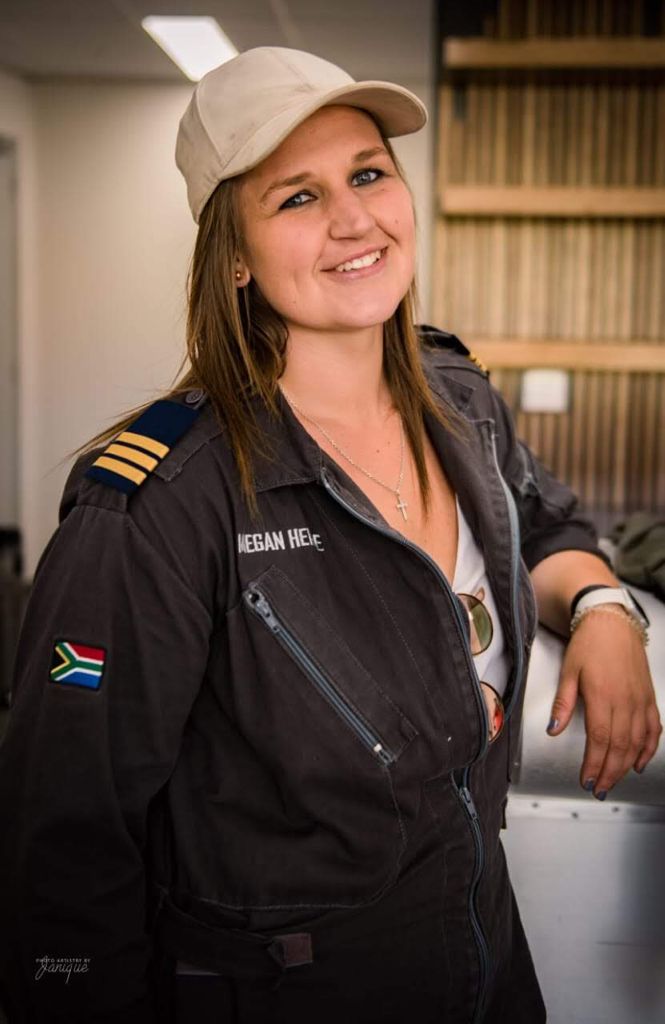 It is early morning, and chopper pilot Megan Heine doesn’t have time to sip her coffee. Instead, the 30-year-old is running towards her Robinson 44 helicopter.

Seconds ago, she was alerted to a hijacking that had just taken place outside Pretoria.

She is based at Ultimate Heliport in Midrand, and works for National Airways Corporation (NAC), which is contracted by Netstar – a subsidiary of Altron.

Megan jumps into the cockpit. Ground teams are already speeding towards the scene as Megan alerts air-traffic control that she needs to take off. Every second counts.

Her eyes dart over the control panel, checking the gauges. The rotor blades are spinning at full speed now. Oil pressure good. She’s ready to go.

The helicopter thuds through the air as Megan lifts off.

Megan grew up in Gqeberha and knew at an early age that she was never going to have a desk job.

“I love nature and challenging myself. I was often on the water, or climbing trees,” she says. “As a young girl, I was either water-skiing, swimming or motor racing. I think I’ve been a thrill-seeker throughout my life and this drew me to the skies.”

The Netstar control room operator’s voice crackles in her ear. The hijackers have stolen a white Toyota Hilux. The operator gives her the co-ordinates.

Megan banks the chopper and heads in the direction of the crime scene. The radio chatter continues between the control room and the ground recovery teams. Megan can hear them speeding to where the vehicle was taken at gunpoint.

This is her fourth year on the job since earning her commercial pilot’s licence in 2018.

“My day starts at 5am with a briefing from the night shift,” says Megan. “After that, I can be at 1000 feet at any moment, chasing the bad guys,” she adds.

Today, Megan knows she will have to pass through military airspace to get to the crime scene on time. She radios the Waterkloof Air Force Base for permission. A refusal will slow her down. She needs to be mindful of other aircraft taking off, landing or passing through the same air space. Mid-air collisions are a risk, which is why flying-safety protocols are so important to every pilot.

Thankfully the air force gives her clearance. Megan demands more power from the Robinson 44’s engine, picking up speed as she races to the scene. She is at low altitude now, just a few hundred metres above the ground – homes, buildings and trees pass below her at pace.

Moments later, she is hovering above the area where the Hilux’s Netstar vehicle-tracking device beeped out its last co-ordinates. Megan and the team know the criminals are nearby.

But there is a problem.

The teams have spotted three white Hilux vehicles in the area. Before they can pounce, they need to be sure they have the right one. But which one is it?

Megan keeps the Robinson 44 circling high above. The three vehicles are not displaying any suspicious behaviour. The team tracks the signals being emitted from the electronic Stolen Vehicle Recovery unit, or SVR.

“We continued orbiting and keeping sight of all three vehicles,” says Megan. “As the pilot, I have to keep in constant communication with the ground crews. From the air, I can keep track of the stolen vehicles and then co-ordinate with the recovery teams on how best to approach the suspects.”

From the air, Megan spots a fourth Hilux bakkie. It is transmitting the SVR signal.

Megan radios the Netstar recovery teams below as the hijackers try to make their getaway.

Again she banks the chopper, its blades thumping the air, her eyes fixed on the vehicle – she dare not lose visual contact now.

“This is when the situation gets dangerous and communication is vital,” says Megan. “I must co-ordinate the hunt from the air, giving the ground teams as much information as possible to cut the hijackers off. There is always the risk they will open fire on the Netstar team.”

Then the hijackers make a mistake.

They underestimate the speed of Megan’s chopper. They try to outrun it and turn onto a long stretch of road, picking up speed. But Megan is one step ahead of them.

“Two of the ground-team vehicles were up ahead. The hijackers didn’t realise it, but they were racing directly towards our guys.”

The recovery team members quickly park their vehicles across the road, blocking it completely. They wait with firearms drawn, and Megan counts them down as the hijackers inadvertently speed towards their position.

It is a perfect trap.

Caught by surprise, the driver of the Hilux is forced to stop and the vehicle is quickly surrounded by the recovery team, with Megan’s helicopter roaring overhead.

The two suspects realise they stand no chance of getting away and immediately give up. The control room gets the call they are hoping for.

“Suspects in custody,” reports one of the recovery-team members.

“This was teamwork at its best,” says Megan. “Once we have the vehicle’s signal, there is very little chance you will get away from our teams.”

“Criminals often think they can escape from a chasing helicopter, but they can’t,” she says. “I recently chased a stolen vehicle for more than 30km before the hijackers realised they could not get away from me. They stopped the car by the side of the highway and tried to run away. But I had been in contact with the ground teams all along and they were quickly caught and handed over to the police.”

Megan takes pride in the fact that she is breaking gender stereotypes about pilots.

“Around 30% of the chopper pilots are female now,” she says. “Nobody has ever given me flak just because I’m a woman. I am appreciated and people in the industry have a great attitude towards growing the number of women pilots.”

“It’s such an accomplishment when we manage to find a missing car or stop a hijacking; it’s the best part of what I do. I love my job,” says Megan.

“When I’m ready, I want to start a flight school so I can help more young people to pursue careers in aviation,” she says.

For now, you’ll find Megan Heine at the controls of her Robinson 44 helicopter, cruising at low levels across Gauteng, keeping the community safe and making life tough for “the bad guys” with her Netstar colleagues.

Previous
Next
PrevPreviousDon’t be taken for a ride: Cyclists urged to protect bicycles ahead of upcoming events
NextHollard wins Customer Service Excellence Accolades at the 2021 Ask Afrika Orange Index AwardsNext
Previous
Next